May I present to to you a bedecked and razzle dazzled version of the classic British tea time cake; the very fine 'Victoria Sponge', more fully known as 'Strawberry Victoria Jam Sandwich Cake', a feast for the eyes, as well as the appetite. Though, I'm inclined to rechristen this cake the 'Eliza Dolittle Cake'. Partly because of how easily this 'lil old common sponge cake transforms into a real stunner, fit for a queen or any fair lady, and partly because there really is not a whole lot to do. 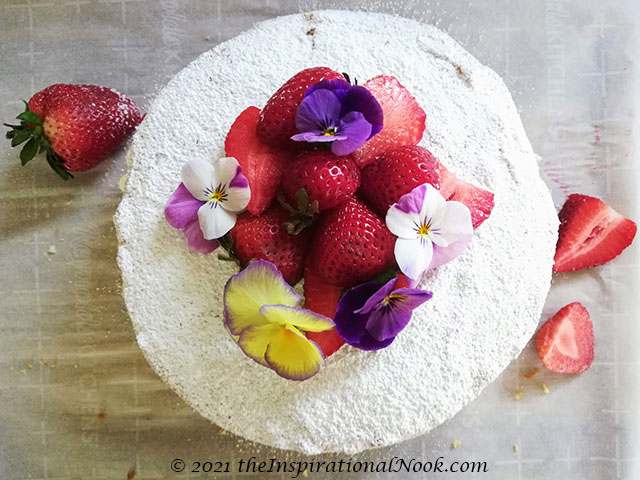 It all began when a few friends decided to pop over for tea and a long overdue catch-up. And since this Spring, the weather has been so cooperative, I thought we'd get together in the garden over a hot cuppa and a coupla treats. From a hostessing standpoint, I wanted to keep things simple for myself, yet special for my friends.

So, one of the things I chose for the menu was a simple common sponge cake, that I elevated to a more sophisticated level by decking it out with a few quick embellishments- a filling of sweet strawberry jam, freshly whipped cream and fresh juicy strawberries, topped off with a lavish dusting of powdered sugar and colorful edible pansies from the garden. 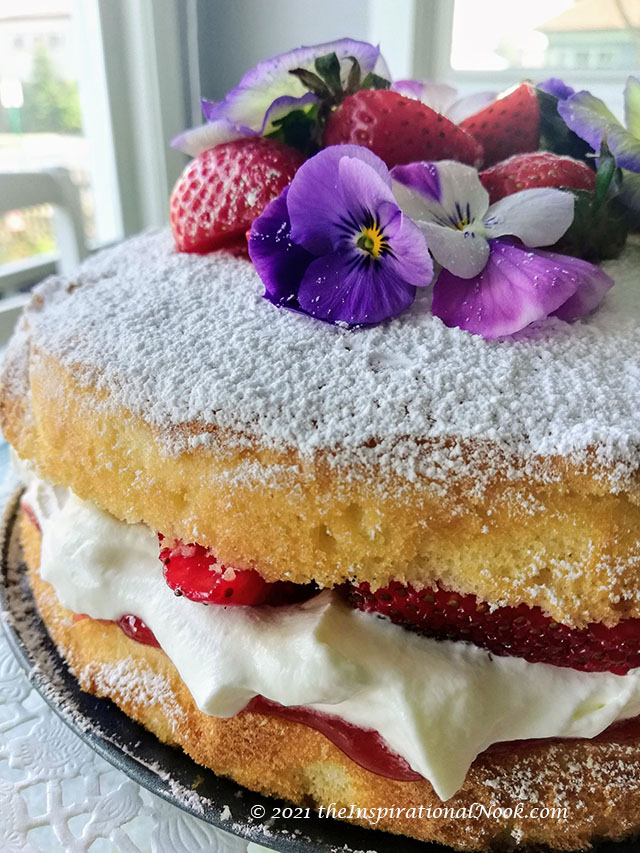 What is a Victoria Jam Sandwich Cake?

This classic English tea time cake named after Queen Victoria, featured a cake with a jam filling sandwiched between two layers of basic pound cake or light sponge cake. Also known as Victoria Sponge or Victoria Sandwich Cake, this quintessential British cake sometimes includes a layer of pillowy whipped cream in the filling. The top of the cake is typically not decorated, other than with a dusting of confectioner's sugar. Given the lightness and simplicity of this cake, it is usually enjoyed with afternoon tea rather than as a dessert at the end of a meal.
Originally this cake would have been baked in a rectangular tin, filled with jam, and then cut into finger sandwiches. Nowadays, it is most commonly prepared as a round cake. 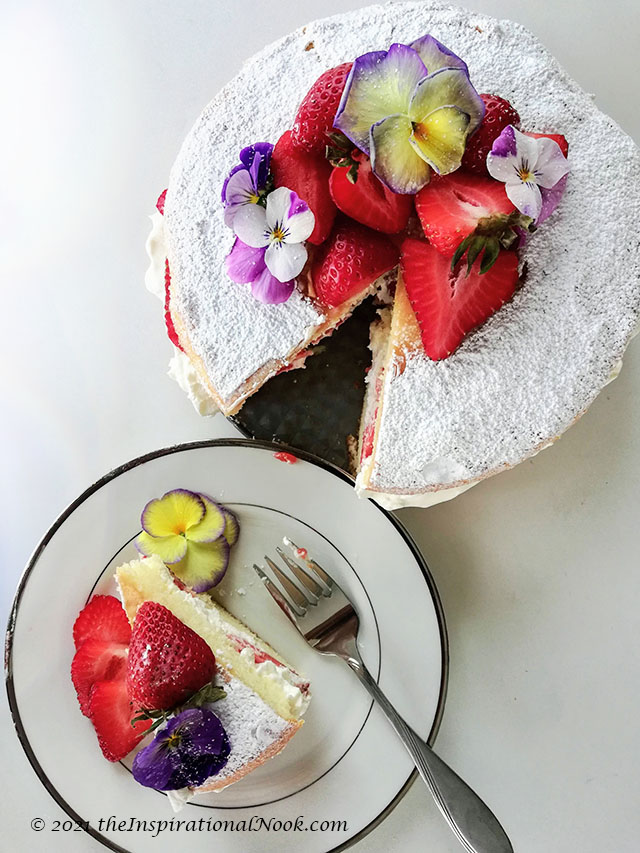 I took the easy way out this time and prepared this cake using a box cake. Below is the method I used to prepare this cake quickly. However, at the end of the post is the recipe for baking a Victoria Sponge Cake from Scratch, which I use when I have more time on my hands. 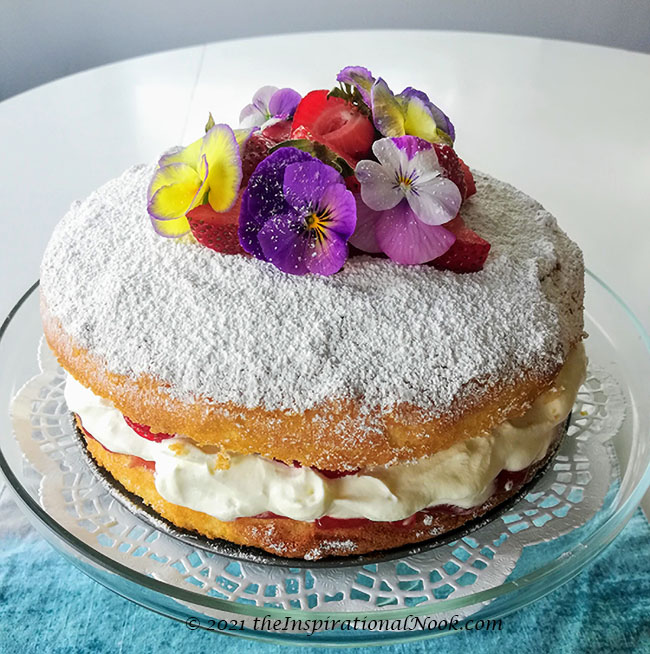 Ingredients:
☐ 1 box Yellow Cake mix
☐ Strawberry jam- 2-3 tablespoons
☐ Heavy Whipping Cream 8oz
☐ Strawberries
☐ Confectioner's sugar for dusting
☐ Fresh violas or pansies, rinsed and dried
Method:
Step 1: Prepare cake
To prepare this cake in a jiffy, I used a Vanilla Yellow Cake Box mix and hacked it to make it taste a bit more like home made cake. Where the instructions in the box cake mix called for water, I replaced it with milk. I also replaced oil with butter for a slightly richer cake. I followed the rest of the instructions and baked the cake in one round tin.
Step 2: Slice cake into two round layers
After the cake cooled, I sliced it into two round layers.
If the top of the cake is too domed or not even, you can level off the top using a large serrated knife.

How do you cut a cake into two layers? 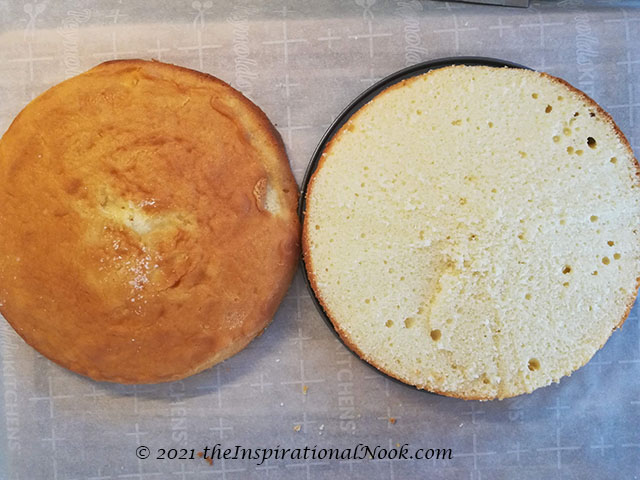 Step 3. Fill cake
Spread a layer of strawberry jam onto one half of the cake. 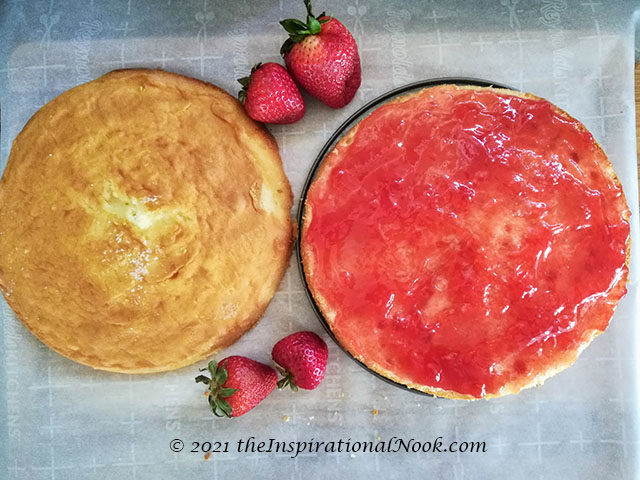 Then, using a spatula, smooth on a thick layer of freshly whipped cream. (When whipping heavy cream, both the cream and the bowl must be very cold. I put the bowl in the freezer for a few minutes before pouring the cream into it to whip. Beat cream with a hand mixi on high speed until cream volumizes, becomes thick and holds its shape). 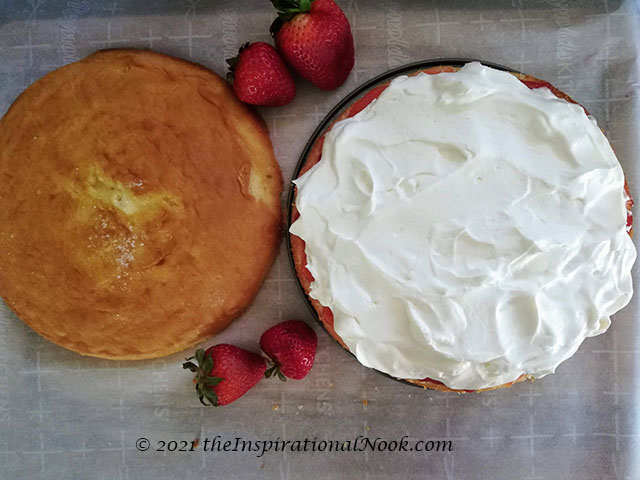 Top with  a single layer of sliced strawberries. 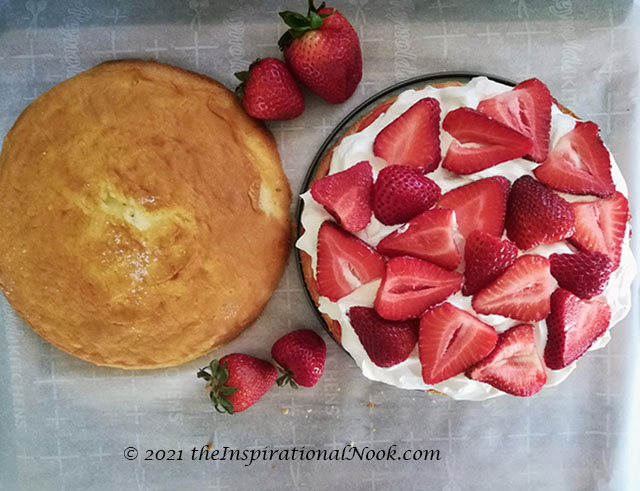 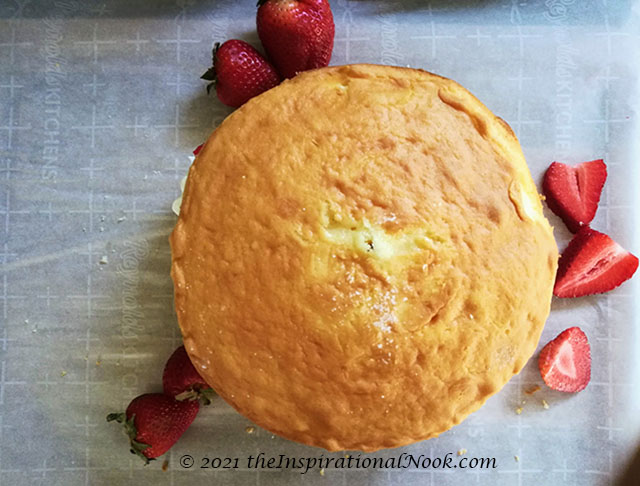 Step 4: Decorate
Using a tea-strainer, generously dust the top of the cake with powdered sugar. 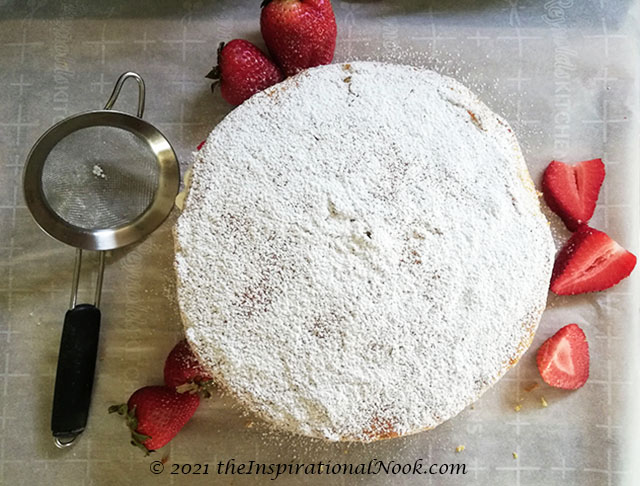 Then decorate the center of the cake with a pile of sliced and full strawberries and pansies. 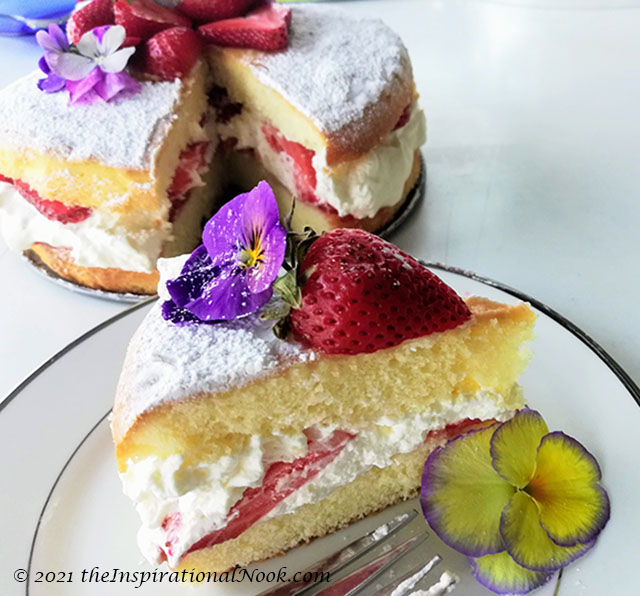 Ingredients
160g unsalted butter, softened
160g self-raising flour, sifted
160g caster sugar
3 large eggs, lightly beaten
1 teaspoon vanilla extract
100ml double cream or heavy whipping cream
125g strawberry jam
1 tablespoon confectioner's sugar, for dusting
Method
1. Pre-heat the oven to 350°F. Grease and line 2 x 8 inch  cake tins with nonstick baking paper. Alternatively, you can bake the entire batter in a 1 x 8 inch cake tin, but ensure the sides are deep enough so that the batter does not overflow when baking.
2. In a large mixing bowl, cream together the butter, vanilla extract and sugar using an electric beater until light and fluffy. Slowly add the egg, beating until fully incorporated. Carefully fold the flour in using a large spoon and spoon the batter evenly into the prepared cake tins.
3. Bake
4. In an ice cold bowl, whip the cold cream to soft peaks.
5.  On completely cooled cakes, spread the strawberry jam evenly on the lower half of cake and then top the jam with a layer of whipped cream.  Sandwich the cake with the other half. Dust with confectioner's sugar and serve.
Recipe adapted from:
Tesco- Victoria Sponge Cake Recipe 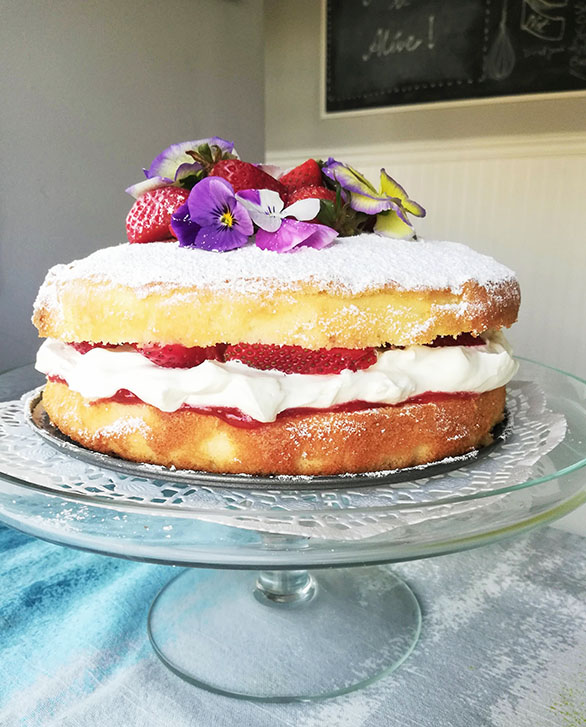 Want to decorate the cake with beautiful sugared pansies instead of fresh ones?  See how to sugar flowers easily with Cointreau and Egg White. 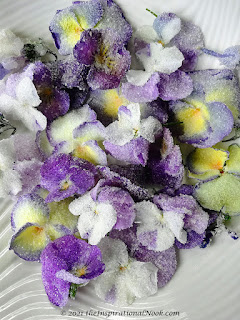 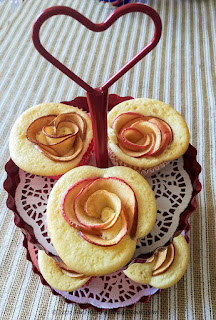 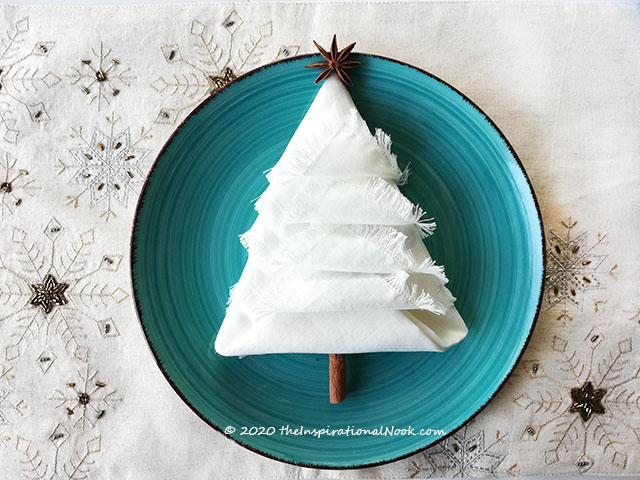 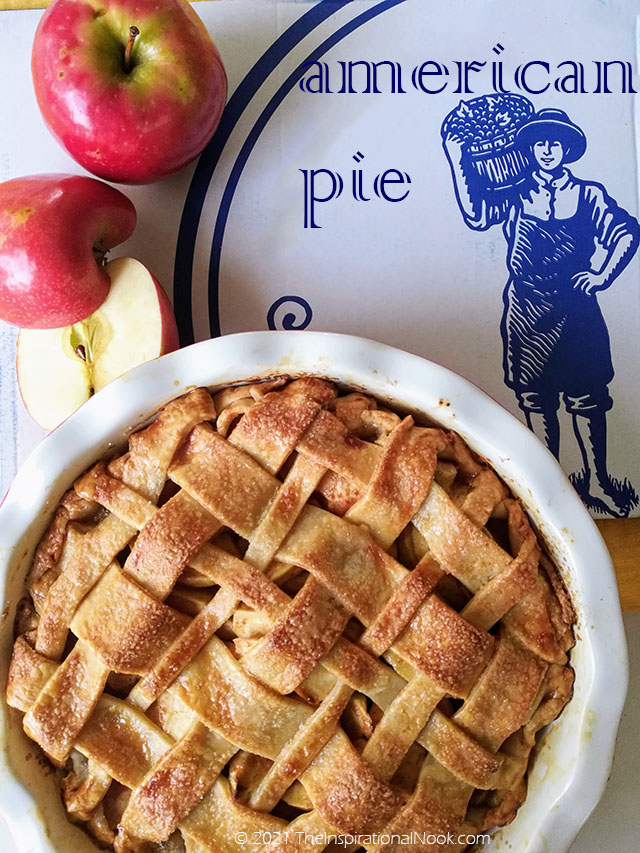 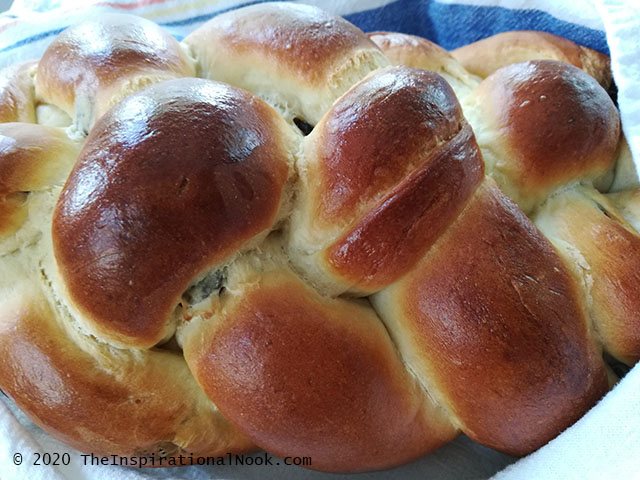 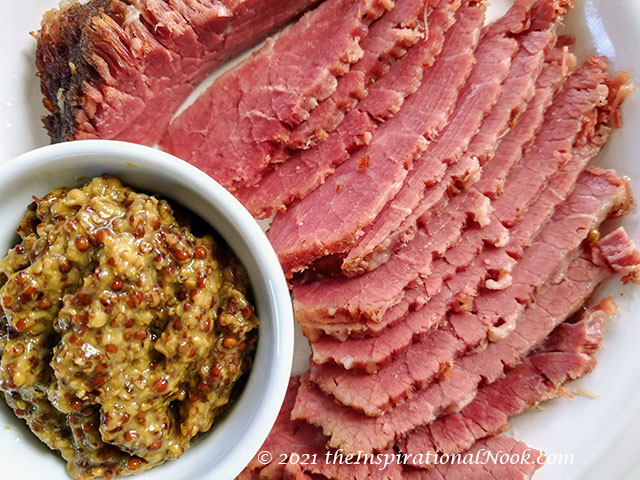 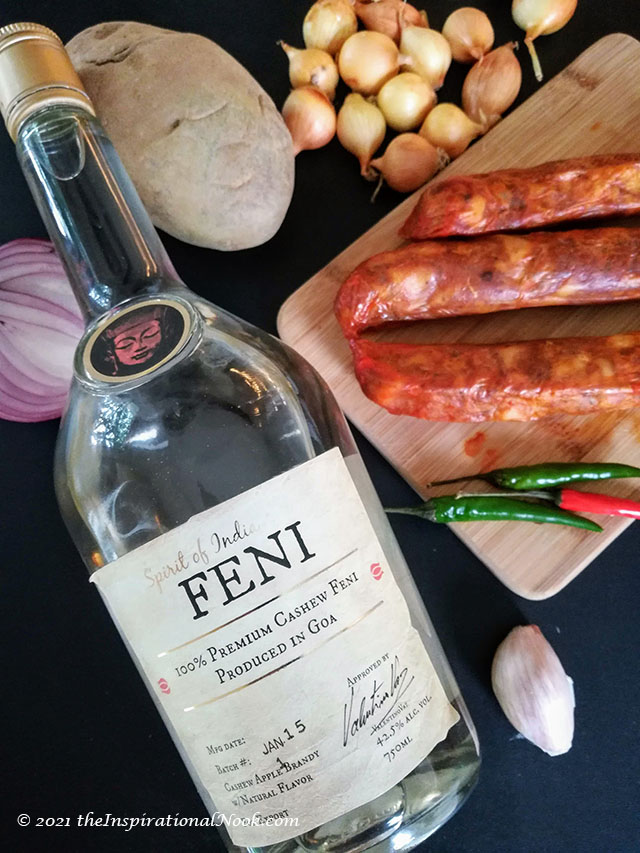